Well, for me they suck most of the times.

Imagine we meet some day and I say “Hey, I just read this XYZ book, it’s so great that it would change your life”. During my 6-month long book reading journey so far, I frequently threw such humble brags at my friends.

And I know, the inner-response of most people would be along the lines of, “Who the hell are you to recommend me books? Do you even know what my problems are? My life is good already, and even if it’s not, I could figure out on my own what I’ve to read”. They don’t say it to my face obviously, but there reluctance and negligence says it all.

And this happens all the time. Remember a time when you excitedly asked your friend to check out that awesome song, but they didn’t pay the attention you expected them to pay? Or when you recommended your favorite place/dish to eat?

But very recently I did something different. At the time when my facebook timeline was flooded with pictures of approaching farewell with emotional captions, I cleaned up my study table (after a very very long time), arranged all the books nicely, clicked a photo and posted that to Facebook. 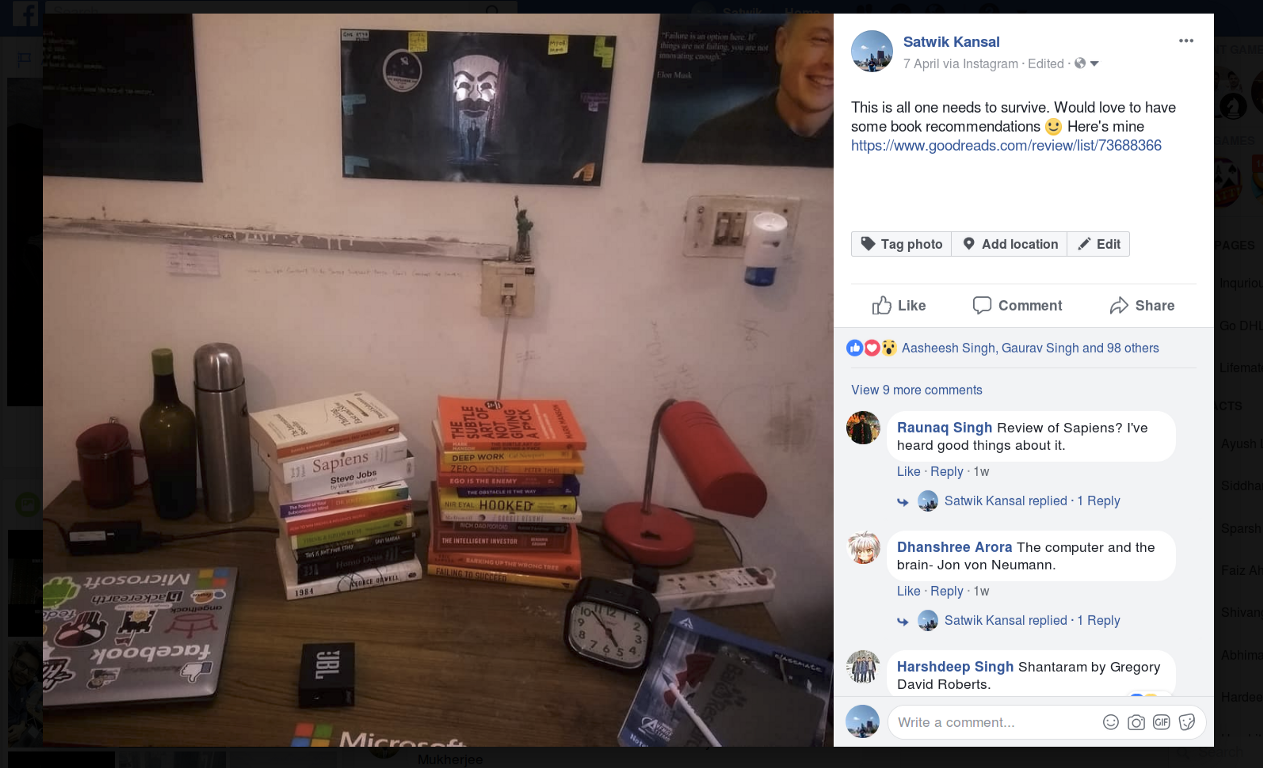 PS: It took me more than an hour to get this done (Thanks to my aged phones’ camera, and the prior “messiness” of my study table).

Along with the image, I just shared my Goodreads account if people wanted to have a look at the books I’ve read till now. And then I asked for book recommendations, because I was obsessed with non-fiction books, was being lazy to figure out more on my own, so I relied on the collective intelligence of my Facebook network.

The results were surprising. 10+ people asked me the book recommendations (which is a big number for me), and I discovered many people with similar interests as me who shared their amazing book recommendations with me (social media isn’t that bad I guess). This, is in stark contrast to my earlier act of personally recommending books to my friends out of the blue.

And the thing is, people “crave” for autonomy.

Earlier, I was trying to “force” my thoughts on people, and ain’t nobody likes that. Whereas in the Facebook post, I just shared the links to my Goodreads account, people could see my recommendations “if they wanted to”. Earlier, I would come across an average preacher guy, but in the post, I was just sharing my thoughts and the way I felt about books, nothing more. The later way was apparently more appealing to people.

Few people asked up for book recommendations because they could relate to the post and envied the pleasure I had from reading the book (the post clearly reflected books were a big deal to me as it was my first post after a long break, and I prefer to post about books over the clichéd farewell photos at that time).

And I guess that’s also a strategy that some brands use to sell their products. I mean look at Apple, unlike most of the brands, I’ve never seen Apple forcing (or even convincing) people to buy their products. They just design high-class products, put up nice stores and simple minimal advertisements, and still end up making way more sales than all other competitors combined. I guess that’s partly because we envy the company, it’s vision for making life simpler and more accessible via innovative products.

Envy is also the reason why we see celebrities in most of the TV advertisements in India. The advertisers could easily save up money by picking some not-so-famous good looking actor. But of course, they are not already doing it because it draws fewer consumers for them. This might be because people in India follow/trust celebrities a lot (idk if that’s the case with other places too), and people see them as facilitators of the product. But in most cases, they’re just peddlers; they don’t use the product themselves.

One should always be skeptic when asking for advice from less personally known persons. I guess some people do have this “giving” attitude, but pieces of advice are only well perceived in only two cases

In other scenarios, one has high chances of being perceived as an egoistic jerk (and you can relate this to celebrities/politicians who’ve tried this in the past and the social media (especially twitter) trolled the hell out of them).

And I feel that the right person to give out the advice is the person who knows his shit well. Otherwise, it’s highly dangerous. And you know, in this digital world full of hypocrisy, appearances are deceptive. I can relate to this because I’ve experienced this. I remember back in my first year of college, I read a Quora answer with around 10k upvotes, and it had a line somewhat like “College life is too short to waste time reading books. Instead, create experiences. You’ve your entire life for reading books”. Just because there were so many upvotes and the guy “seemed” knowledgeable, I followed the guy’s advice until my final year, and of course, I regret it now.

So advices should always be taken with a grain of salt. Considering there are stupid people like me existing in the world who might blindly follow advices or so-called wisdom, we should all be careful about shelling out our gems of wisdom in public. It’s an act of responsibility. Even Mark Manson says in his book, “We are all wrong”. It’s just that some people are less wrong, and we as individuals, become less wrong over the time due to learnings from our mistakes/experiences.

That’s the reason when someone asks me questions like “What is the programming language I should learn?”, “Will AI destroy humans?”, Etc, my response is like “I don’t know man. Here’s what I feel …. (blah, blah)…. But, you should figure out it on your own”. Some people feel that I’m unwilling to help, but the truth is I don’t know these shits so well to be affirmative in my opinions about them. So I may end up shooting random thoughts which may end up with no conclusion (or sometimes even with conflicting conclusions). Just like what I did in this post :)